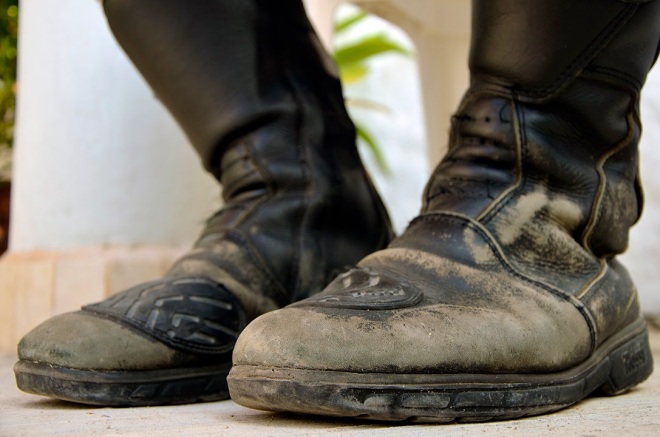 Riding and hiking have different considerations for obvious reasons, and the design of footwear is where it is most noticeable. Hiking usually asks for breathability and light weight while needing a burly tread pattern and an all-day-comfort footbed. Motorcycling asks for protection and a seamless transition from the boot’s chassis (upper) to its sole, with feedback and feel being very important features. And the same problems are tackled in different ways between the two designs; even if a moto-boot needs breathability, it is designed to breathe at 50mph, not at walking pace. It is quite simple: different demands require different designs. What is not simple is that motorcycle travel means you should carry as few items as possible while still getting the job done and being able to surmount small setbacks.

I have looked at several footwear options and still have not arrived at a “shut up and take my money” solution. Bates Footwear raises my eyebrow with their brand new (technically a year old) leap into powersports. Because I’ve already spent long hours marching and standing formation in Bates boots and dress shoes while in the Marines and then Army, I trust them explicitly. However, they did not specifically design the Taser or their other moto-boots to be day-hikers. One keen look shows they are designed to work on the bike and on the street, but the Adrenaline and Beltline do boast tread patterns that could handle moderate trail work.

Some dual sport riders tout Alt-Berg boots or Kochmans but these are not sold in the US and therefore become unattractive options for the budget-minded traveler. My usual solution to the ride/hike dilemma was to use my old military-issue hot weather boots, but the blocky tread, reinforced toe, and complete lack of crash protection made them a poor compromise. Using ultra-expensive boots that have to be ordered from dealers in another continent can’t really hold my attention because I’m too busy clutching my wallet fearfully. 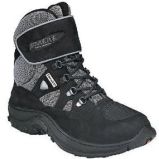 Kochman is also no longer available in the US . 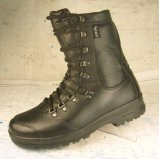 Alt-Bergs are not sold in the US anymore.

On that note, tactical boots at least cover some of the bases while ranging in price from stupid-cheap knock offs to ultra-expensive symbols of insecure masculinity. Since these boots are meant for less abusive work than forced marches and digging a fighting position they can be noticeably lighter, with less blocky treads and zip-up sides. If you aren’t going to have decent ankle protection on the motorcycle, might as well make it easier for the paramedics to get them off. However, these boots are designed neither for long hikes nor are they meant for motorcycling; a shady compromise at best. 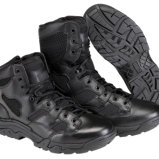 Tactical boots offer many designs, treads, heights, and some are actually not black.

Tread patterns & sole stiffness can make tactical boots hard to use on the road.

Tactical boots can be too breathable for motorcycling

Established brands used to offer some solutions to this dilemma but they do not seem to be big sellers. Alpinestars has had the CR-4 boot for years but I do not know a single person who has owned a pair. They are also no longer produced. Forma has what amounts to a mid-length motocross boot. Hard to know if it would work on a day-hike until you’ve already spent over two hundred smackers.

My personal solution is not a solution. Frustrated by the difficulty shifting gears in my old combat boots (not to mention the lack of any ankle protection or support), I usually wear a dilapidated pair of Alpinestars Joey waterproof shoes, mainly because they are two-and-a-half years old and I don’t care what happens to them. Being for city use, there was never much tread on them and at this point there isn’t any tread to speak of; not fun on anything but the most well groomed and dry trails. I also have a super-cheap pair of tactical boots but they suffer not only the maladies of being cheap but they also offer little protection. At least shifting gears with them is easier than my old combat boots.

Because I find additional footwear to be the most frivolous of investments when packing for a motorcycle trip, I’ve been searching for a compromise that can handle both on and off  bike duties… and at a respectable price. It seems impossible so I wonder: do any of you have any ideas? Have you come across any boots that work great on the bike and walking the trail as well? Share your insight and thoughts in the comments section. Let’s see what kind of good solutions are out there.

4 thoughts on “Hiking And Motorcycling Boots”

Rewatching @motogp races and preseason testing is a sure sign you are going through racing withdrawals.
I gave the 'ol Remington #typewiter its 1st bit of customization, from a #FortuneCookie I got awhile back. When I want to kill time I type a page instead of heading to the liquor store, so it's a perfect addition. #jkroams
Rush hour in the east SF Bay, approaching the Bay Bridge and 580\880 interchange. This is usually a total cluster in both directions. This makes me want to move out of the city more than ever. #jkroams #openroad
My interview with Bob Marshall is live on the blog for @russbrownmotorcycleattorneys. It was a real pleasure to spend time with the guy, do some riding, and talk about the world at large. #jkroams #Repost (@get_repost) ・・・ @americanroadrunner says the answer to all of life’s mysteries is, “motorcycle.” [Blog In Bio] 🏍
For the record, the police in #Sturgis have the coolest logo of any police Dept I've seen. This is on their cars too, not just the bikes. . . . #jkroams #instamoto
It was no frills but just how I like it. For my bday on Wednesday I got some tires swapped, then grabbed a #burrito 🌯 and #beer 🍻. Nice to be out on the bike, traffic be damned. . . . #jkroams #sfbay #burritorun #birthdaypresenttomyself #instamoto #modelo