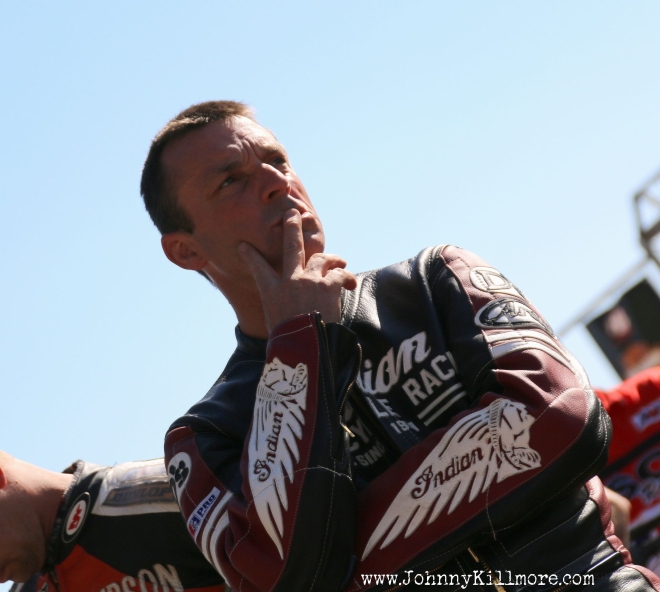 If you have raced competitively at any level you know the feeling. It could have been running track in high school. It could have been mountain bikes in a local club. Here it is national level flat track. In any event you’ve felt the butterflies. You probably developed a pre-race ritual or routine to burn off the excess adrenaline.

When I was a rookie club racer I pictured myself loading up the van and rushing out the front gate before anyone could notice. I mentally ran through each step of packing up the tools and the bike and the fuel cans, calmly and quietly. Could I do it fast enough without drawing attention? Fortunately I never went through with my plans. The mental exercise did manage to keep my brain busy long enough to hear first call on the P.A. system though, when I could switch my attention to putting on my gear and getting the bike ready. “No time to back out now, Johnny.”

On the AMA Pro Flat Track Grid, each rider has their own ritual as well. Below, in pictures, let’s walk around the grid of the Ramspury Wines Santa Rosa Mile and look into the faces before the races.

What often looks like a rider nervously kicking at clods of dirt is actually an important pre-race ritual. Checking the racing surface for dampness and consistency allows a rider to gauge how conditions may have changed since there heat race, which could have been hours ago.. Here we see Briar Bauman on patrol. Conditions at Santa Rosa this year were extremely harsh.

Temperatures nearing 100°F combined with a persistent wind. This quickly carried off anything the water trucks laid down. The result was a rutted inside line and a high line of deep sand that forced riders dangerously close to the air fence. Those that braved the middle line were thrown around with such force that I nearly dropped my camera once, and this is was not exactly my first time watching flat track through a lens.

All eyes were definitely on turn 1 before the main event. The conditions had been atrocious all day and a lot of track preparation had happened between the last main event (which had two red flags) and the upcoming final. The groomed surface can look quite nice, but after 18 motorcycles hammer through it while fighting for position it can rapidly change… and it did.
Here, veteran Kenny Coolbeth (left) stands with points leader (and eventual champion) Bryan Smith (center) and Jake Johnson (right) while they all try to unlock the mysteries of turn 1. Observing from a distance, they seemed to have more concern than I’ve seen in the past. When smiles came, they reminded me of those I saw when my unit fired engines to begin a convoy in Iraq.

Joe Kopp had the keys to the kingdom at Santa Rosa. Working as a development rider for Indian Motorcycle®, he was out of retirement to put the new Scout® FTR750 into battle for the first time. If you place well, you’re a legend. If you do poorly, you’re just developing the bike. No pressure right? Not exactly.

Kopp took second in his heat race and won the Dash For Cash sprint earlier in the day. He was also starting from the inside of the first row… pole position. That meant a mob of extremely hungry people behind him; people with a whole season at stake. He needed to calculate and be aggressive, but his worst nightmare would be to ball up the bike (and himself) or to blow up the engine from over-revving it on the long back-straight. He had a lot to think about. 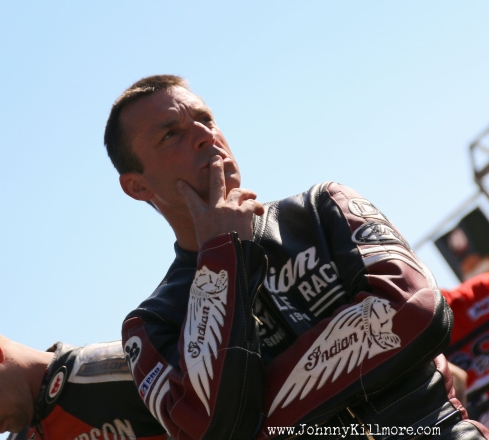 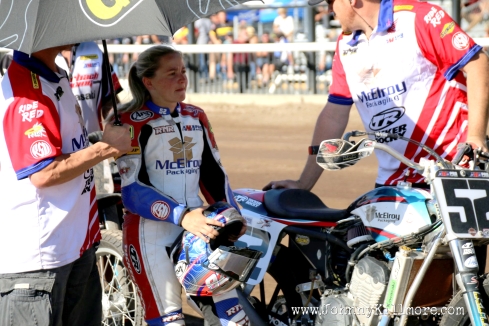 Shayna Texter was among a few that appeared to be her usual self during the Santa Rosa pre-race. To be perfectly fair, most of the grid looked fairly normal if you consider there had been extremely difficult surface conditions and two long delays for serious incidents during earlier races. Adding that to the normal pressure of this being the final race of the regular season and most people look more serious than usual. Even if your final points position is settled, you still want to end your season on a good note.

Talking shop is a great way to pass time. Here the just-crowned GNC2 champ Ryan Wells (right) could very well be talking about the racing surface with Bryan Smith (left). About 20 minutes after this picture, Smith would begin 25 harrowing laps where I personally saw him nearly tossed from his Crosely Brands Kawasaki on five separate occasions. That was just from what I could see in turn 1.

He would finish second, just holding off defending champion Jared Mees, which gave Smith his first national championship in the premier GNC1 class.

Bryan Smith’s face could have been made of concrete before the race began. He seemed 1,000 miles away, and although this is not uncommon for him (or many riders for that matter), you could feel an increased tension in the air. I have previously attended the Flat Track Finals in Pomona, California on more than one occasion but did not find the pall in the air to be the same.

There was tension without a doubt. Championships would be decided. All the effort of the entire year was about to pay off spectacularly or come up a few yards short. The air had an electricity in it. Santa Rosa felt more like everyone was waiting for a gunfight to erupt; one that no participant or bystander really wanted to be involved in.

The line up. To give the fans and those streaming on fanschoice.tv some interaction, the grid briefly lines up for introductions on the jumbo-tron before returning to their bikes and suiting up. I actually forgot to take pictures because it was such a curious sight. Some riders didn’t even remove their helmets, refusing to being taken out of the zone. Some riders could manage a smile. Most gave a quick wave and went right bike to their team. Time to get to work. 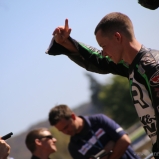 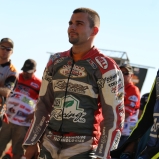 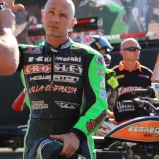 Joe Kopp’s stare got even more distant once the helmet went on. Having pole position gives you an advantage, but it also means every other set of handlebars on that track is aiming at the same piece of real estate you are.

Jared Mees was in another world during the final minutes. He held the number 1 plate and aimed to keep it, trailing by only two points going into the race. There was only one goal: beat Bryan Smith. He looked up several times right here but I never got an in-focus shot. His eyes didn’t show worry… just intensity.

Final adjusments in the California heat. 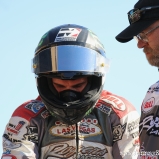 Mees’ crew remained close and ready but let the champ collect his thoughts before the race. 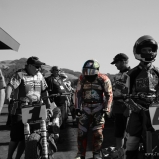 Despite all the crowds and commotion, carrying a number one plate into battle can make you the lonliest man on the planet.

When the green flag drops, the bullshit stops. Joe Kopp (#3) got the holeshot and led early before battling with Bryan Smith (#42, not pictured). Brad “the Bullet” Baker (#6, not pictured) eventually took on all comers and walked away, leaving Smith to second. Kopp fell back to an eventual seventh. Here, Jared Mees (#1) passes Kopp for 3rd after Mees struggled early and had to pick his way past several riders. He then made a long and determined charge in the closing laps, finally catching an exhausted Smith with gusto, but lost out on the championship by 0.304 seconds. Oh, to have one more lap.