Skip to content
Posted on March 29, 2015April 2, 2015 by johnnykillmore Posted in Johnny Killmore

Today the Team Johnny Killmore racebike left our hands for good. The frame supposedly started out as a Windle Formula 2 chassis that was shipped to America and left in a crate until it was well into obsolescence. In 2005 it was finally built into a running race machine and eventually traded up by its owner for another bike. That is when It fell into the eager hands of Team Johnny Killmore’s driver, John Wood. It was underpowered and antiquated, but John was enthusiastic and didn’t know any better, so there was little to stop the team from moving up the finishing order.

A passenger was secured in 2009 in the name of Vanessa McClure, someone with a fresh enough concussion from crashing motorcycles to think it was a good idea to hang off the side of a motorcycle while someone else steered it at breakneck speed. Adding Chris Rizzo to the mix when the series moved to the Pacific Northwest, the next impediment was the 1995 Suzuki GSX-R750 engine. In a world of modern 1000cc engines, there was plenty of room for improvement.

Tapping into a modern-ish 2002 Suzuki GSX-R1000, the bike shot to the podium spots, eventually attracting passenger Giorgina Gottlieb. The machine took to the Pikes Peak International Hill Climb in 2011 and 2012 with Chris Rizzo as passenger and set the class record in the last year of dirt and the first year of all tarmac. Meanwhile it also took honors on short circuit racing with the SRA-West series, pulling off a 2nd place in 2012 and then winning the championship in 2013.

At this point the engine was upgraded again to a newer unit and it became apparent the antique frame had reached the limit of its design (and many redesigns).  The team soldiered on but a crash in 2013 at Pikes Peak and the sudden high speed ejection of passenger Giorgina Gottlieb in April of 2014 dampened any momentum toward another championship.

Finally, it was time to decommission the outfit and put it in the hands of someone who would be able to use it best. The racebike had remaining potential, but it was best used by a new team looking to learn the ropes and build speed and team work. Afterall, it managed to do this for a now successful race team once before.

As the curtain falls for the TJK Windle #187, it looks ahead to a chance at building future champions, as it already has once before. In looking back on the machine’s time with the team, it is beyond ironic that the day it left for a new home is also the day of Chris Rizzo’s funeral. In his first race weekend onboard the machine it would flip over and steamroll him after a spin into the grass. Trapped underneath, Rizzo was pried out and popped up to his feet wearing a smile so big you could see it through his helmet. “Are you alright?!!” John would ask. “Dude that was awesome!” was Chris’s enthusiastic reply. Close calls and adversity followed them to Pikes Peak but the team dug their heels in and made a name for themselves nonetheless.

Chris Rizzo was hit by a truck and killed while riding on the street. After so many brushes with the limit of life, the limit was found unceremoniously and suddenly. As the Windle chassis heads to a new home and a new series of possibilities, we at the TJK headquarters like to envision Chris Rizzo doing the same… leaving the garage of earth to find new adventures on the sweeping corners of a new horizon.

Ride well, ride fast, and never look over your shoulder. All that you need lays before you. From apex to apex, from birth to death, forward is the direction.

Humble beginnings for the Team Johnny Killmore Windle, seen here with passenger Vanessa McClure when it first took the #187 monicker.

Practice at the bottom section was the only time we got the bike to work all week. Photo: Travis Tollett.

Becker was on our tail for much of the race. Here he sets up to make a bid for the lead on Sunday.

John Wood and Chris Rizzo during practice at Pikes Peak

“All in” means never having to hold your breath to see if you pulled something off. Photo: Kim Durham

Vanessa takes on the off-time duties

Cutting through the old paint turned out to be very time consuming.

Test fitting a fiberglass riser that will help keep me out of the wind and add a better look to the race machine.

As close as we could get to being ready for paint, so it’s primer grey for the rest of the year! 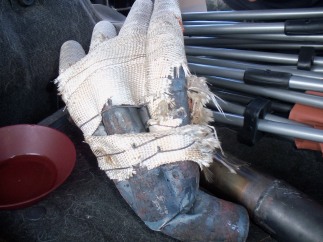 The most significant damage is to the exhaust header.

3 thoughts on “Comings And Goings”