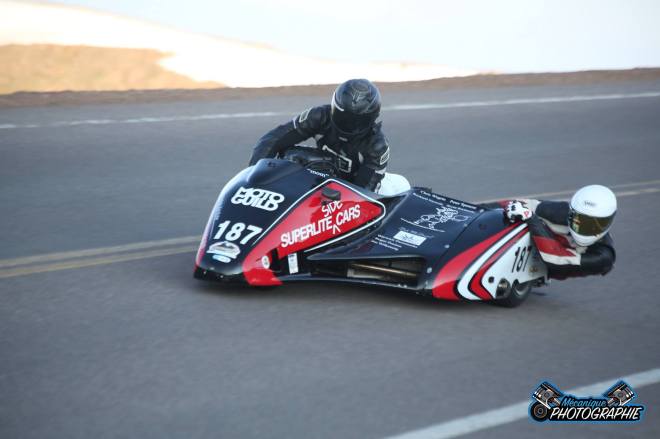 Well the action is pretty tepid so far on the mountain and that’s a good thing if you ask me. During these early practice days, “action” is usually defined as people and machines being mangled or adverse weather conditions making it difficult to operate. On the overall there are some interesting things to note. Let’s take a look.

The practice times are broken down by class so you have to dig a minute to see that Don Canet posted the fastest time in the motorcycle division aboard the Victory Empulse TT. However he just managed to edge out teammate Jeremy Toye on the Project 156 machine, a truly enjoyable machine to simply be around and listen to as it ticks quietly at the end of a run. Sitting in between these two times was Corsican rider Bruno Langlois on a Kawasaki Z1000. All three of these machines & riders are running in different classes, showing that speed can come in many forms.

In the world of sidecars all the drama is in the paddock. Last year’s winner Masahito Watanabe has been plagued by engine problems and has yet to turn a wheel in anger. They bravely pushed their machine around the paddock all morning in a futile attempt to get their Suzuki engine to fire. Having engine problems of their own, French sidecar team Les Marluches abandoned their effort for the day and were seen trying to  help their Japanese rivals breath some life into their ailing machine. The French hope to use Honda parts that may be compatible with their Benelli engine to rid themselves of the knocking noise deep in the bowels of their machine.

Problems also struck current record holder Wade Boyd of Subculture Racing in the form of a “hopping” chain. Although it did not completely jump off the sprocket, their drive chain continues to hop over the teeth of the rear gear whenever they exit slow or medium speed turns (which means most of the course). They are off to find different sized sprockets today in an effort to mitigate the problem.

Perhaps I have paid my dues to the gods of broken sidecars. The Team Johnny Killmore Shelbourne F2 is running with only minor issues related mostly to driver fit, i.e. I can’t get my foot to engage the shift lever and I can’t reach the handlebars when turning left at low speed. Fortunately Fran Hall at Superlite Cars put together a solid machine for us and the big pieces are humming along without complaint.

I did manage to nearly toss us off a cliff when I forgot co-pilot Matt Blank was still learning the course. With his head up so he could see where we were going, the chair wheel unexpectedly lifted and I barely got control before we met disaster. On the overall though Matt is doing well instinctually and we are trying to take the course a turn at a time. I’m hoping his memory serves us both so we can push for a record (should the weather allow).

This year is actually quite exciting if you want to watch the electric vs. combustion battle. With both machines being fronted by Victory and a true privateer sitting in between, it will be fun to watch things develop. After all, Langlois managed the fastest time during Tuesday’s optional practice while I overheard Toye stating that a change he made today transformed his feel with the bike. No one has a lock on any class in these early stages.